Home/Uncategorized/Sailing on Cerulean Seas
Previous Next

Hellas – The Spirit of Freedom, Excellence and Beauty

A tiny sailboat bobs on the whitecaps accenting the teal blue sea. I have stopped to watch as it makes its way along the backdrop of the distant island of Salamina. Nearer, gulls catch the currents on this breezy morning and circle in slow spirals above the small harbour where the little fishing boats gather. It is my daily view always the same, yet always changing. Shortly a huge blue and white ferry with its unmistakeable red smoke stack will glide by silently slicing through the waves with just a froth at its bow.

The ferry is regular and predictable. In all but the most severe winter seas, it will keep its schedule and transport people and cars to and from the islands and the busy port of Perieas. From the many gates at the port that serve the various island groups, Saronic where we are, Cycladic, Ionian, ferries let off passengers who whizz by car, impatiently disgorged from its capacious belly, to the nearby highway or pedestrian travellers who quickly walk, suitcases rolling in tow, to the metro station  where within minutes they will be in downtown Athens. 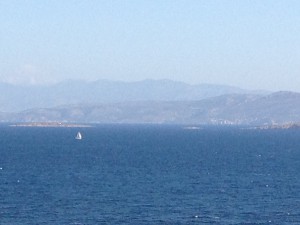 But it is the sailboat I am watching. It is I who am bobbing on a glorious spirit that is Greece – or better described Hellas. I have come to Hellas with my Hellenic life partner and true sweetheart, Athanasius, thinking we would stop in, see family and take off for an adventure in Italy. Instead, after traversing the mainland from the mountains and seas in the north to the mountains and seas to the south, we are here on the island of Aegina, quite by serendipity.

At the open terrace windows, the white curtains billow and a small chime with Chinese characters is dancing with a tinkling tune that is sweet until a gust sends it clanging. As the sun has risen, the sea is deeper blue – almost royal – and the distant freighters at anchor waiting to offload in Perieas have emerged from the morning mist into more distinct and silent shapes.

Directly across from our little house, on the rise above the sea, is what appears to be a leviathan or giant sea serpent lumbering just below the surface, with rounded stone back and rump and tail and tip visible as if it was about to rise its full mightiness. Beyond, Salamina where the famed battle to conquer the Persian invaders succeeded and behind that the mountain ranges of the mainland. Each formation is less distinct  as they recede into the mists and finally merge with the sky softened blue grey at the punctuated horizon. In the evening light, we have counted six distinct masses, layered in ancient rounded and craggy massiveness, underlined by the straight line of the changing blue yet constant Aegean.

I feel I have pushed off from the shores of the known in my little boat and have caught the gentle wind that is filling my sail and taking me skimming across the waters of infinite possibility. The sea is my soul and the boat is my will. I am no longer anchored by expectations, my own or others and I am feeling the wind in my hair and the sun on my skin. I have freed my will and aligned it with the will of creation. I am willing to be taken where it is most fulfilling and joyful for me to be. And it is here.

Hellas is a land of such abundance that to think of it only in images of islands with whitewashed houses with cobalt blue shutters, aqua and ultramarine seas is to see only the bright ribbon on a very large and lavish gift. This land is so rich and diverse and resplendent with a spirit of such humility that it is awe inspiring. The humility rises from a people whose very DNA remembers the Golden Age when Greece was greater than any civilization before or since and which seeded the western world with science, art, language, political democracy, the reminders of which still stand on sacred places in such places as Sounio, Olympia and Athens. Waking every day to the Parthenon offers a life changing perspective of what man might be and what man actually is.

Centuries of wars, and occupation which in the north ended less than one hundred years ago; brutal killing off whole villages and the willful destruction of the ancient monuments has taken a heavy toll. This is a simple country, mostly rural and in many areas remote, an agricultural land which has been sent racing headlong into a European Community running as fast as it can, long before the country was okay with walking.

While the rest of Europe enjoyed the renaissance inspired by the Greek scholars with ancient texts of Pythagoras, Plato, Hippocrates, and the like, who fled the Ottoman occupation, Greece was submerged by oppression into a land of isolated and distrustful tribes. The Golden Age of Athens lasted a brief one hundred years before it lost its own compass and its leaders, once devoted to the law, freedom and equality fell by their own hubris into excess, exploitation and betrayal. And once again, the tribes went their separate ways.

Still today, whenever Greeks meet in the first conversational volley after Geia Sas (ya sass – hello) is where are you from? Even the suffixes of last names are indicators of regions and villages. However, once birth place is ascertained and potential cousins here and afar can be discerned, the Greek will then offer to share his food. Like the food, the Hellenian is simple and wholesome. In the greater more sophisticated world community however, simple for some reason has become synonymous with lower values rather than higher.

The irony is that despite the betrayal by many of its own political leaders and the resulting economic debacle which inexorably rests more squarely on the shoulders of the have nots rather than the haves, the country can boast what many cannot. Unspoiled tracks of land, crystal waters, thousands of species of plants and herbs – over one hundred species of olives alone when most of the world has become specialized. Protected areas of wildlife and wildflowers. Mountains springs that perpetually flow clean, alive and pure. And most precious of all a longevity to be envied by cultures all over the world. Graves show pictures of youthful smiles in ancient weathered faces and the stone is etched with the age, 102, 90, 98, 114. When Harrison Ford sighted that sixty was the new forty, some octogenarians in the mountains were tending their goats or trimming their vines with a laugh and a song and a twinkle.

The wind has risen, though there are fewer white caps now, the rolling seas are deeper. The water has changed hue to cerulean and in the bay, where the harbour embraces the small wooden fishing boats that look like they may be from centuries ago, the shallows are aqua and pale celadan green where the waves break over the rocks. There are more sailboats out on the sea this afternoon. I am finding my way in this land of natural beauty, philosophy and poetry – recalled to a life purpose once abandoned for a better idea.

Athan is finding his calling in the land of his birth among the olive groves and the source of the other sustaining foods of the ancient Hellenes that assure health and vitality. But we are meeting others, many others, who by themselves or in small groups are recapturing the spirit of the land, the culture and its people. It is the spirit of freedom, excellence and beauty. We are sailing together – separately- kindred to the wind and the ever changing constant of the soul.

read more about our work here in Hellas http://hellenic-certified.com/hellenic-revival-described/