Yesterday I was feeling like the early spring weather; decidedly overcast and cloudy. Rather cool towards the day. I suggested to Athan that we take a drive across the island to stop at the potter’s shop and from there to the ‘big’ town where our favorite vegetable vendor would still be open even though most places are closed Friday afternoons.

We could tell from a distance that the pottery place was closed but pulled to the side of the road and walked across to peer in the windows. Plates and bowls of fired clay were stacked on the floor; aqua, orange, green and brown. Jugs and small pitchers for water and wine and flowers crowded shelves haphazardly alongside dozens of ashtrays and matching cups and saucers. Figures of gods and dolphins, ships and sunbursts leaned against each other and threatened to overflow the table top. We cupped our hands and looked in the window between pieces on narrow shelves behind the glass – not so much on display but hastily shoved out of the way and given over to the dust from the road.

In the far reaching gated yard, around and under trees, rotund planters in unglazed terra cotta held up wall ornaments in relief; Athena with wings in deep blue glaze, Dionysus and Apollo with grass growing between them. Hung higgledy jig on the fence were flying fish, sailboats, suns and moons and creatures of myth. When we happened on this place last summer, the potter came out of his workshop attached to his house and wandered over to greet us.

“Geia Sous”, Athan began to chat while I smiled with a bobbing head and waited for the brief translation that would tell me that this was his father’s shop and his father’s before that. He went on to say that he loved creating pottery so much that he couldn’t stop which made sense of the crowded space knee deep in stacked plates with a thin serpentine path leading to the back shelves. A path most safely trod by the owner who would keep his balance and save the dishes from and accidental body crush. This man had passion and wanted no more of life than to create something useful and pretty

We took home a lovely aqua glazed vase of a traditional shape and a wall plaque of the four winds that hangs on the stuccoed wall outside our front door. We have a planter of his too that we bought last year at a fair by the harbor in the port town of Aegina. It holds our large basil plant that is the familiar greeting for Greek homes. Kept well watered and misted, it is heaven to run your hands over the fragrant leaves as you pass by. As I write, the vase the color of a robin egg is holding a sweet scented bouquet of freesias in bunches of yellow, white and wine red.

Alas, the little bowl that I had so wanted to buy today to cheer me up was not to be had. We thought the potter might be at home and hear us outside his door and come to investigate, but no one came. I heaved into the car and closed the door with a disappointed clunk. Athan was checking a tire that had a slow leak and so I waited quietly, listlessly and then I saw it. There just outside by window teetering on a brown and dried out stock of last year’s Queen Anne’s Lace was a snail clinging and teetering in the soft breeze. It was marvelous to behold in its gentle swirls of pale aqua, sky blue and sand. Beginning at a central dot that looked like a small navel, the shell spiraled out to its fluted edge. 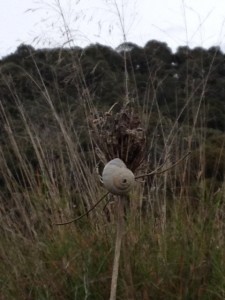 There. Right there. A gift for my eyes. A subtlety of shape and color that was not mere chance but a design of skilled delight. I might never have seen it. Might have sped right by and never stopped. But it would have been there just the same. Serene and perfect. What else did I miss. How full are the moments that spill though my hands, my eyes, my ears? How many birdsongs have I not heard because I was not listening. I was busy saying something that could never be as profound as the joyful trill of a robin or sparrow in spring.

As we turned back and headed over the mountain to the other side of the island we began to notice. Lemon trees heavy and abundant with large ripe yellow fruit clustering amid waxy green leaves. Waiting for the tenants who winter away to come and be delighted and begin a sweet spring harvet. Terraced hills with stepped walls of millions of small stones, golden pink, piled on on top of the other define properties and hillside plots of olive trees or grasses. These winding stone walls tell on sight of generations and centuries of bent over toil, taming the wildness to feed a family. Wild almonds with tentative pink white blossoms. A tree with dancing branches ebullient in deep purple flowers fairly glows in the grey afternoon light.

Before we rounded the corner and would see the enormous Agios Nektarios domed cathedral that is always a bit of a surprise rising up in the middle of nowhere, we looked up into the craggy mountains that hid it. There, high up, centuries old, some crumbling with rocks strewn about are tiny one room chapels or stone huts. In the stillness, they have become more deeply silent in emptiness than when they housed a lone and meditating monk. Caves grown in with dark tangled green call to the child in us to go on an adventure. But we demure. We travel past.

Past the nun’s retreat, an ungainly white convent with Greek blue roofs. Around and past the princely gates to the monumental church dedicated to a humble charismatic priest. Agios (saint) Nektarios who became a saint for his healing ways and continues to grace the expectant and unsuspecting alike in attentive presence. Many miracles are told of this place, of this saint. I have had my own mystical moments.

But really, what is more mystical and reverent than seeing with loving eyes? Seeing the beauty and the abundance of all creation. The kingdoms of creatures, flowers, trees, rocks and men. The elementals.are believably near today. There is magic in what I see and the magic is most felt in my open heart as my spirits lift and my mind quietly attends.